This article is intend to explain to new users, who are unfamiliar with computer theory, basic concepts of computing and computer systems organization and structure.

The idea of the creation of this article was inspired by the general disorganization of such kind of theoretic articles and pages at OSDev.org. And as long as theory is very important for beginners (and as long as they generally never ever read serious books), this chaotic structure of theoretic material will cause problems in comprehensive study of OS development. But this article is meant to fix the problem

It's impossible to study all the topics of physics, circuitry and computer science in within one article. Instead, all these subjects will be briefly touched. To do so in organized order, we must divide system into layers, each having its own rules and aims. To do so, we must manage complexity of the system

Managing the complexity of electronic systems 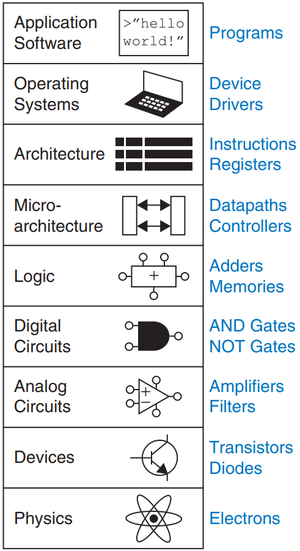 The system you are using to read this article (let me guess it's a personal computer) is one of most complex systems ever created by the mankind. Just imagine hundreds of billions transistors on several separate integrated circuits joint together and operating at gigahertz rates, running hundreds of millions lines of code in a blink of an eye - hundreds of thousands of computer scientists, engineers and programmers united their efforts to make this miracle come true in less than 80 years...

However, I bet you are not experiencing any kind of trouble with using such a "miracle". The main reason of it is that, despite you don't realize it really, you are managing complexity of your system. It have let you to open this article in few mouse clicks without having to keep in mind details of, for example, the HTML protocol your browser used to obtain this article from the website. Instead, you delegate this task to your web-browser - this is an application software

, which uses abilities of operating system

to run, which uses definitions and rules of architecture

layers, and so on

As you can see, each abstraction level use models and features of underlying level (e.g. logic uses digital circuits as much as application software uses operating system features) Also, each level hides details of implementation from the overlying level (e.g. user do not have to bother about representing their requests in "computer" form as long as application software provides the human-understandable GUI)

And it means, that each layer accomplishes two tasks:

Since this tutorial was written for OS and applications developers, detailed description of three lower levels of hierarchy will be skipped 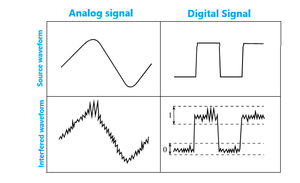 Difference between analog and digital signals being interfered. While analog signal turns out to be totally messed up, digital one still remains understandable

As you surely know, all the modern computers are implemented using digital logic, but why?

There are few major reasons:

These facts are the main reasons of domination of the digital logic over analog today.

So, what helps digital logic to attain such appealing properties? It operates only two signal states - LOW and HIGH, instead of wide spectrum of voltages as in analog circuits.