From OSDev Wiki
(Redirected from Nanokernel)
Jump to: navigation, search

Exokernels are often compared to (or conflated with) hypervisors, and the implementations of both are usually quite similar, especially when hardware virtualization is used; most exokernels can in fact serve as a hypervisor for other OSes, if one chooses to. However, the use cases are radically different - the purpose of a hypervisor is providing an abstraction over the hardware, whereas the purpose of an exokernel is to make such an abstraction unnecessary. Furthermore, in most current uses, the hypervisor itself is running as or in an instance of a general-purpose OS. While the move to 'containerized' clients for hypervisors can be seen as a hybrid of the two ideas (at least on a conceptual level), in practice they are not the same. 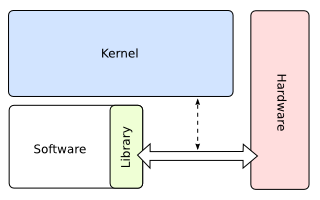 The concept of an exokernel is orthogonal to that of micro- vs. monolithic kernels. It is not important whether the secure multiplexing is performed in privileged kernel code or usermode servers, just that there are no forced abstractions.

Take the typical abstraction of a file. Files, as the application sees them, do not exist on disk. On the disk, there are disk sectors. The operating system abstracts the reality of the disk to create the more convenient illusion of files and a filesystem. Usually, security is also provided at this level. ACLs, Unix-style permissions, etc. are applied to files. Security is combined with the abstraction.

On exokernels, security is provided on the unabstracted hardware level, in this example, to disk sectors. LibOSes provide any desired abstractions on top of this interface. Non-overrideable security is put in the exokernel, and the overrideable abstraction is implemented in a libOS. Security is separated from abstraction.

The upside of this is that user-space applications are allowed to implement their own, optimized memory management (by directly accessing e.g. memory tables), file access (by "raw" disk access), etc. This can, for special applications, result in significant performance increases. Engler et al. benchmarked a web server, Cheetah, running on an exokernel being up to eight times faster than the competition. Cheetah, among other things, uses knowledge of HTTP to combine IO requests, knowledge of HTML to appropriately colocate resources on disk, avoids copying data by sending resources to clients directly from the file cache, and caches pregenerated network packets. See Application Performance and Flexibility on Exokernel Systems.

In addition, by being aware of resource availability, revocation and allocation, it is hoped that applications can make more efficient and intelligent use of hardware resources. For example, a server would know not to make its cache in memory larger than the amount of memory it actually has. In traditional systems, the operating system would fake however much the server had allocated with virtual memory, and the server would carry on, ignorant of any page faults, swapping, and paging.

It is also hoped that exokernels will, in a similar way to microkernels, ease development and testing of new operating system ideas. New scheduling techniques, memory management methods, filesystems, etc. can be developed and tested in libOSes, which are more quickly and easily modified than current operating systems. In The Exokernel Operating System Architecture, Engler recalls the story of an undergraduate who was able to develop and test a new page table structure on an exokernel in a week while the designers had only been able to simulate it.

Exokernel technology is still not thoroughly researched, so surprises might lurk everywhere. Moreover, the added flexibility for user-space programs also means reduced consistency. While it would be theoretically possible to provide libOSes that enable e.g. MacOS, Windows, and Linux applications to run simultaneously on the same system, that would also mean different look & feels for each of them. In addition, different libOSes may have varying levels of compatibility and interoperability with each other.

The ease of creation and mixing of libOSes could lead to code messes that would be a nightmare for maintenance coders and system administrators. Maintenance coders would have to deal with not only the application code, but any overriden abstractions or new implementations.

Information that could otherwise be useful to a kernel can be lost if the related abstractions are implemented in libOSes rather than the kernel.

While Monolithic Kernel and Microkernel are rather well-defined terms, the advocates of exokernel-like technology have coined many different terms - nanokernel, picokernel, cache kernel, virtualizing kernel etc. Most of these are relatively minor variations of each other.

Nanokernels and picokernels are usually small kernels considered by their creators to be even smaller than microkernels. Examples include: Adeos, KeyKOS, and LSE/OS. Another very famous example is the symbian EKA2 kernel. This nanokernel implements drivers inside the kernel making it not fully a microkernel.