This is an introductory tutorial for kernel development on the x86 architecture. It is a minimal example only, and does not show you how to structure a serious project. However, completing this project is a good first step for aspiring kernel developers.

By the end of this tutorial, you will have the following:

What This Is Not

Before proceeding, make sure you have the basics ready.

It is important to make sure that you have enough basic knowledge. Kernel development has an extremely steep learning curve.

If after reading this you feel like you have a few holes in your knowledge, I highly recommend reading Beginner Mistakes and related OS theory first.

You will also require some software tools to develop this project.

We will be developing our kernel for the x86 architecture. The x86 is a family of computer architectures first introduced in the 1970s. Most modern PCs are backwards-compatible with x86 however, so we should have no problem running our finished kernel on real hardware.

The x86 is a CISC (Complex Instruction Set Computer) architecture. This means that it has a large instruction set that we can manipulate in order to execute programs.

We will be compiling our kernel with our current operating system, with the intention of it running free-standing (i.e: independent of any other OS). For this reason, we will be using a cross-compiler to create our final executable. Cross-compilation is the first stage of writing a new operating system. After a huge amount of work, it is possible to make an operating system 'self-hosting'. This means that it is capable of compiling itself rather than relying on an existing OS. However, that is a long way down the road. For the foreseeable future, you will be cross-compiling your operating system.

We'll be writing the kernel in x86 assembly and the C programming language. When the x86 first loads up our kernel, it won't yet be in a fit state to run C code. This is why we must use assembly to first set up a basic C environment. Once this is done, we can write (most) of the rest of the kernel in C.

The x86 is a complex architecture with various different CPU states and modes. To avoid having to deal with them right now, we'll be using the GRUB bootloader to load our kernel into memory and set up a stable 32-bit 'protected-mode' environment.

The first thing we need to do is to build ourselves a cross-compiler toolchain to let us compile and link code for the x86. Until we have that, we can't do anything. A standard C compiler won't work: it doesn't understand how to generate the machine code we need for this project.

You can find instructions for building a GCC cross-compiler for the i686-elf target here: GCC Cross-Compiler

Don't attempt the rest of the tutorial without getting yourself the correct compiler. I can assure you: it won't work.

So we know the theory, and we have our tools ready. What now? Code? Well... before putting finger to keyboard, it's a good idea for us to take a step back and think about what we have to work with.

Freestanding - What Does This Mean?

I've already mentioned that we're running our code 'freestanding'. But what does this mean, and how will it affect us? It's important you know. Normally when you write C code in a hosted environment, you have a plethora or interfaces available to you. You can read from files, you can output messages, you can get user input... All with just a few lines of code. Sadly, we don't have that. Those things are provided by an operating system. And right now, we don't have one since we ARE the operating system.

What we DO have access to however is a few useful headers GCC automatically provides us with (they give us things like fixed-width integers) and the hardware of the x86. We'd like to output text, so for that we're going to write ourselves a very simple driver that interacts with the x86's VGA buffer and allows us to display text on the screen. In doing this, we'll have to avoid using anything like the C standard library, because it simply isn't available when we're compiling for a freestanding target like we are now.

Please remember, this is a minimal setup. A more advanced kernel project will have a more complex code structure, as well as an automated build system.

For now, we'll be creating 3 files in our project directory. They are:

First, we create start.s. To best understand the code, I recommend typing it out by hand such that you can understand each part in detail.

This file is a link script. It is used to define how bits of the final kernel executable will be stitched together. It allows us to specify alignment, address offset, and other such useful properties of parts of the code that we need when our kernel gets linked together into an executable. You don't normally do this when you're writing C code - the compiler will do this for you. But this an operating system kernel, so we need to explicitly define a lot of these things.

Now comes the magic. We'll be compiling the code we've just written into object files (if you don't know what these are, you can think of them as flat-pack shelves from IKEA. They are blobs of compiled code packaged along with instructions explaining how they should be linked into a larger executable).

Once we've compiled the object files, we'll be using our linker (part of our cross-compiler toolchain) to link the object files together into the final kernel executable!

To compile our code, we'll need to run the following commands:

This will create two object files named start.o and kernel.o ready for linking.

There are several parts to the above command:

Finally, to link the objects together into the final executable, we'll run the following command:

Running The Kernel With QEMU

After all that, the linker command should have produced a file named mykernel.elf. This is our kernel image. Congratulations! I would tell you to give yourself a pat on the back, but it's wise to wait until we've seen it actually working before doing that.

Do you remember how I said that we'd need to use the GRUB bootloader? We will need to for real hardware. But luckily for us, QEMU has the ability to read Multiboot kernels built-in, so we don't need to go through the hassle of attaching our kernel to GRUB.

To run your kernel with QEMU, you can use the following command (replace mykernel.elf with the name of your kernel file)

If everything went to plan, you should see something like the following appear: 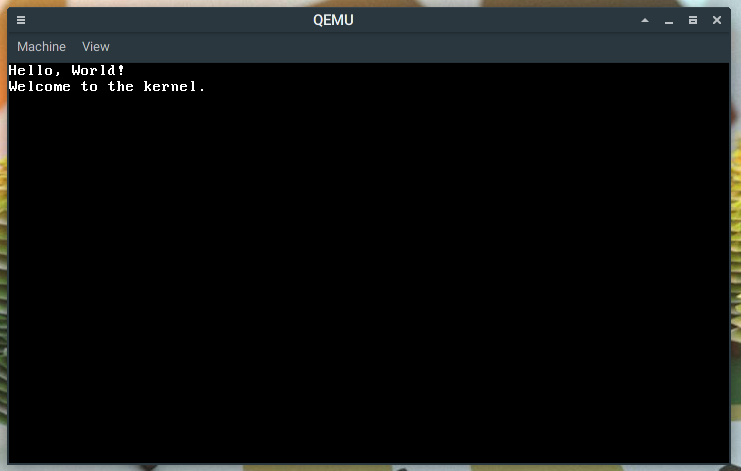 If this isn't what you see, then I recommend going back through the code and checking you typed everything up correctly, ran the correct commands, and that you have a working cross-compiler. Please only ask for help on the forums or via IRC if you've double-checked your method.

Running The Kernel With GRUB And Real Hardware

To attach your kernel to GRUB and test it on real hardware, you'll have to first have GRUB installed. We'll be using GRUB2, so make sure you have the latest version on your system.

We'll need to start by creating a new directory tree for our GRUB ISO build. I call it 'isoroot', but you can choose whatever name you want. Inside that directory, you'll need to create a directory called 'boot' and a directory below that called 'grub'. Create a GRUB configuration file called grub.cfg in 'isoroot/boot/grub'. You'll want to put the following in it, and then adjust the contents according to your directory structure and kernel name.

Once you have done this, copy your final kernel .elf executable that we linked previously into the 'isoroot/boot' directory.

Your final file structure should look roughly like this:

Congratulations! If all went to plan, you've just produced your first ever working x86 kernel ISO disk image. This disk image will happily run on emulators like VMWare, QEMU, VirtualBox and Microsoft VirtualPC. If you want to run it on real hardware, simply flash it to a USB or disk drive like you would a Linux distribution LiveCD. For a good tutorial on how to do this, take a look at [Ubuntu: Burning ISO File Tutorial].

Note: The x86 VGA textmode device we rely on in this tutorial is dependent on the existence of the BIOS. This ISO can only be booted properly from a UEFI system if it is in a BIOS compatibility mode (often referred to as 'legacy mode').

At this point, you may be wondering what else we can do. I'm sure you have grand visions of a working filesystem, a GUI (Graphical User Interface), or even your system running some of your favourite games. But now is not the time for grand visions: You would end up disappointed anyway. The path to writing a complete operating system is a long and confusing one that involves years of dedicated work. Keep your goals realistic, but feel free to play around with the code and test out new ideas.

With that in mind, here are a list of things you can probably achieve within at most a few days with a little work.

Add Color Support To Your Terminal

Color will improve the look of your kernel a lot. You'll need to find a sensible way of defining available colors in code (The VGA textmode buffer provides support for 16 colors in both the background and foreground of your text) and then changing them in the code. Color support will also be useful for displaying colorful error messages as your kernel grows in size (trust me: you'll spend a lot of time debugging).

Add ANSI Support To Your Terminal

Add Scrolling To Your Terminal

Scrolling is a common feature in CLIs (Command-Line Interfaces). When text runs off the bottom of the screen, can scroll the rest of the text upwards to fit a new line below rather than simply loop back to the top of the screen as we do now. To achieve this, you'll need to shift all the characters in the VGA buffer upwards by one row.

Create A Build System For Your Kernel

At the moment, we compile and link our kernel by manually running several commands. As your kernel grows, this will no longer be a realistic way of doing things. You'll need to design and implement a build system that can build your kernel for you. Common kernel build systems use 'make', 'CMake', 'autoconf', 'SCons' or 'Tup'.

In C and particularly C++, the compiler will often generate code that is meant to be run when the program starts. Currently, we don't have any means to run such code. As our kernel grows, we'll need to add support for this.

There is a whole world of interesting things to explore through operating system development. To improve our kernel further, we will need to better understand the x86 and what hardware we have available.