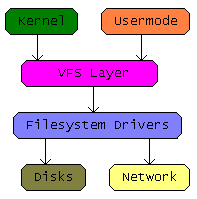 VFS in relation to kernel

A Virtual File System (VFS) is not an on-disk file system, or a network file system. As such, it's neither a data structure (like ReiserFS, NTFS or FAT), nor a network protocol (like NFS). Actually, it's just an abstraction that many operating systems provide to applications, so don't let the name scare you.

Virtual file systems are used to separate the high-level interface to the file system from the low level interfaces that different implementations (FAT, ext3, etc) may require, thus providing transparent access to storage devices from applications. This allows for greater flexibility, specially if one wants to support several file systems.

The VFS sits between the higher level user space operations over the file system, and the file system drivers. Having a VFS interface implies having the idea of mount points. A mount point is a path inside the virtual file system tree that represents an in-use file system. This file system may be on a local device, in memory or stored on a networked device.

Disambiguation of the underlying semantics of a VFS

A VFS, in concrete terms then, provides a uniform access path and subsystem for a group of file systems of the same type. To date, there are three common types of file system: Hierarchical (the most common), tag-based and Database file systems.

The VFS model used in *-DOS and Windows NT assigns a letter from the alphabet to each accessible file system on the machine. This type of VFS is the most simple to implement but is restricted to 26 mounted file systems and can get more and more complex as features are added, so you might want to use numbers instead. When a file is requested the VFS checks what drive the file is on and then passes the request on to the relevant driver.

A more complex model is that of a mount point list. This system maintains a list of mounted file systems and where they are mounted. When a file is requested the list is scanned to determine what file system the file is on. The rest of the path is then passed on to the file system driver to fetch the file. This design is a quite versatile one but suffers from speed problems when large amounts of mount points are used.

A VFS model that can be very efficient is the Node Graph. This model maintains a graph of file system nodes that can represent a file, folder, mount point or other type of file. A node graph can be faster to traverse than a list but suffers from complexity problems and, if a large amounts of nodes are needed, can take up large amounts of memory.

Each node in a node graph has the name, permissions and inode stored within a structure along with pointers to file IO functions like Read, Write, Read Dir and Find Dir.

These models represent the basics for a VFS to be designed on, they have their problems however. Scanning through a list of mount points and then passing on to the file system the remainder of the path is usable for a simple OS but requires large amounts of repeated code as each driver must be able to parse a path reliably. A node graph on the other hand, requires a node for each file and directory on the system to present in memory at the same time, otherwise features like mount points would have to be constantly refreshed.

A compromise between these two systems would be to have a list of mounted file systems and use that to determine what mount point a file lies on and then use nodes that do not necessarily have to permanently reside in memory to store file information and methods.

One of the most important part of an OS is to create the file abstraction, that is, hide the underlying file system structure and sector layout from the application. This is usually implemented by open, read, write and close system calls (stands for both POSIX and Windows).

This function is responsible for finding or creating a context (VFS inode or vnode) for the given filename. This usually means to iterate on the aforementioned VFS nodes in memory, and if file is not found, consult the mount list (see above), the file system driver and the storage driver to get the required metadata (in POSIX terminology, fstat struct). The open system call returns an identifier that connects the opened file with that context. This identifier can be globally unique (like FCB), or local to the process (an integer, typical in UNIX-like systems). The pointed context should have information like

It is advisable to create another abstraction layer here and divide the context into two. One structure describing all the information from the FS point of view (vnode), and another structure for the application's point of view (open file struct, only referencing the vnode). The advantage here is, that you can keep a counter of number of open streams in the vnode, which you'll need later. Remember, more process can open the same file for reading, therefore you cannot put file position in the vnode directly. Whether you allocate this open file list in the process' address space or in the VFS, is up to you. But vnodes must be stored in a central place in VFS, otherwise you won't be able to avoid race-conditions and implement proper file locking.

Applications know nothing, all they can see is a linear, contigous data stream. This means that the heavy duty of translation falls to the VFS layer. This is a very complex task, and notoriously hard to get it right for the first time. A typical read should do the following steps:

2. Using the file storage information in the context, VFS must create a list of sector addresses for the device. This can be done in a uniform (FS independent) way, although file systems tends to use very different allocation algorithms (FAT clusters, inode indirect tree, extents etc), therefore most VFS implementation delegates this task to the file system driver. Don't forget that file systems use logical sectors.

4. Now that the list of physical sectors is known, the VFS can use readsector calls in the appropriate disk driver. The storage device is stored in the context (providing the device parameter for the call), and the kernel's device tree should tell which driver to use.

5. Once the sectors are in memory, the VFS needs to copy their contents into the reader's buffer. If file position is not multiple of the sector size, then the first sector will start with extra data VFS must skip. If file position plus read size is not multiple of sector size, then the last sector has extra data that VFS must discard.

6. VFS must do housekeeping in the context. This is typically means adjusting the file position and things alike.

7. VFS may now notify the reader (in POSIX that means to awake the blocked process).

Write has similar steps, but there the VFS must allocate logical sectors (or clusters, stripes etc. whatever the file system is using for allocation) calling the file system driver. With writes, VFS should read the first and the last sector at a minimum, because they may have extra data, see step 5 above.

Finally, the close function is responisible to flush any modifications to the file into the storage (in case of writing), updating the file system metadata. This usually means a call into the file system driver. And last, but not least, free the memory allocated for open file list entry. If you have separate vnode + open file list (you should), then VFS must decrease the vnode's open streams counter, and if that's zero, also free the vnode.